We chase this feeling.
And we'll keep on chasing it.
All the way down the line.

Big waves, small waves and anything in between

"When I'm on a wave all I have to think about is smacking the lip." - Jesse Richman

Instant drift with a flick of the wrist

Powerful, reactive and controllable, the Carve provides instant drift with the flick of your wrist, allowing you to power on and off instantly, stay in the pocket for longer and out of the critical impact zone. Featuring a sensory pivot turn for control, and huge depower range, the Carve gives you the confidence to focus on surfing, in onshore to offshore, and anything in between, while strong surf-freestyle characteristics let you throw down strapless freestyle and perform lofty jumps with ease. Compared to the rest of our North range, the Carve sits further back in the wind window and enhances down the line drift, perfect for carving and tucking into a barrel. 3 x Kitesurf World Champion Jalou Langeree's kite of choice.

The Carve's responsive two-stage arc design enables tighter turns without excessive amounts of power. As the arc shape becomes narrower the kite uses less of its projected area, giving it a smaller turning radius for tighter turns, and less pull or power in turns.

New bridling ensures you’re able to maintain the drift when you're sheeted in, the kite is responsive and goes down the line. But when it’s offshore or you're riding overpowered, there's now a lot more reaction from the kite when you sheet out.

Changes to the bridle have improved the top end wind range of the kite. We've traded a little from the bottom end for a considerable amount more top end depower, so you can experience bigger jumps with better hang time in stronger conditions. 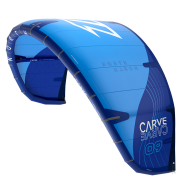 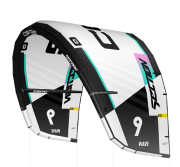